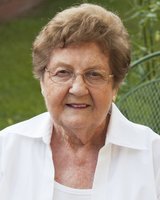 Mrs. Margaret Naomi Kennedy Stricklin, 92, a longtime resident of Daleville, passed away peacefully on Sunday, August 4, 2019 in Thousand Oaks, California after an extended three year stay with her daughter.

Funeral services will be held at 11:00  A.M. Saturday, August 10, 2019 at the Daleville Baptist Church with Reverend Jim Peters,  Reverend James Kilpatrick and  Reverend Jud Waldrop  officiating. Burial will follow in Daleville Memorial Gardens, Holman Funeral Home and Cremations of Ozark directing. The family will receive friends Saturday in the church sanctuary from 9:30 A.M. until service time.

Margaret was born in Midland City, Alabama to the late Lee and Naomi Kennedy and grew up in Abbeville. After graduating from Abbeville High School, Margaret started her Civil Service career working for the Army at Camp Rucker, she transferred to Fort Benning, Georgia in 1946 and worked until 1953.  After marriage and several moves, and when her children were older, she decided to resume her Civil Service career in 1967 at the Military Induction Center located at Fort Holabird, Maryland.   She also worked at Fort Hood, Texas and Schofield Barracks, Hawaii.   In 1971 she returned to Fort Rucker and worked there until 1988 when she retired from the Directorate of Engineering and Housing Engineering Plans and Services Division with over 30 years total in the Civil Service.  In addition to her parents, Mrs. Stricklin is preceded in death by her husband of 60 years, career veteran Ervin E. Stricklin; and one sister, Eleanor Hill.

Surviving relatives include her son and daughter-in-law, Ronald and Marita Stricklin of South Barrington, Illinois; her daughter and son-in-law, Deborah and Richard Fletcher of Thousand Oaks, California; and her grandsons, Jon Stricklin and Robert Stricklin and his wife Natalie of Chicago.