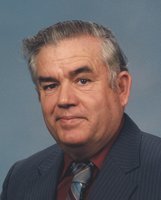 Mr. Verion LaDon (Don) Hughes, a resident of Ariton, went home to be with the Lord on February 12, 2020. He was 84 Years old. Graveside services will be 2:00 P.M. Friday, February 14, 2020, in Mount Olive Cemetery in the Rocky Head Community with the Reverend Dave Walsh and his grandson, Mr. Hunter Hughes, officiating, Holman Funeral Home and Cremations of Ozark directing. Don was born on December 5, 1935 in Ariton, Alabama to the late Odie Maxwell Hughes and Mattie Frances Miller Hughes. He served in the Navy for 4 years and worked for the United States Postal Service for 27 years as a rural mail carrier. He was a member of Ariton Baptist Church and served in prison and jail ministries for 16 years. He had a passion for serving the Lord and leading people to Christ. In addition to his parents, he was preceded in death by his infant son; a sister, Edna Ruth Mauldin; and daughter-in-law, Dina Hughes. He is survived by his wife of 60 years, Ann Daniels Hughes; sons, Victor Hughes (Pam), Ken Hughes and Brian Hughes (Pam), all of Ariton; grandchildren, Hunter Hughes (Kirsten) of Loogootee, Indiana, Cody Hughes, Kristen Hughes (Cody), Heath Hughes and Hannah Hughes, all of Ariton; great-grandchildren, Hudson Hughes and Colten Raymond; brothers, Max Hughes (Betty), Ross Hughes (Joyce); and sister, Katherine Goodson (Gerald), all of Ariton. The family would like to express a special thank you to Kindred Hospice of Dothan. In lieu of flowers, memorial contributions may be made in his memory to Ariton Baptist Church Building Fund, P.O. Box 27, Ariton, Alabama 36311.