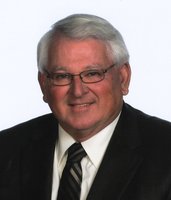 Reverend Freddie L. McCain (Pastor McCain), a pastor and longtime resident of the Wiregrass area, passed away peacefully on December 19, 2020, at the age of 75 due to complications from COVID-19. Funeral services will be held 2:00 P.M. Wednesday, December 30, 2020, from Skipperville United Methodist Church with Reverend Bradley Chamblee, Reverend Dr. Ed Glaize, Reverend Christopher McCain (Eulogy) and Reverend Ray Weaver officiating. Interment will follow in Skipperville Community Cemetery, Holman Funeral Home and Cremations of Ozark directing. The family will receive friends at the funeral home in Ozark Tuesday, December 29, 2020, from 4:00 P.M. until 7:00 P.M. Serving as pallbearers will be Joe Arnold, John Adams, Chris Reynolds, Richard Brownell, Michael Noble, Trenton McCain, Bill Baker, and Russell Dawsey. For those attending the funeral service it will be broadcast on FM 87.9. The family ask you to participate from your car in the parking lot of Skipperville United Methodist Church. Please come to the front door of the Church to sign the guest register. You may also view the service on Skipperville United Methodist Church Facebook Live. Pastor McCain was born March 2, 1945, to Fred and Clara Mae McCain in Alexander City, AL. He served in the United States Air Force from 1966-1970, in Vietnam from 1967-1968, and in the United States Air Force Reserve from 1970-1972. He received the rank of Staff Sergeant during his years of service. Pastor McCain graduated from Benjamin Russell High School, Alexander City, AL, in 1963 and received his Associate's Degree from Alexander City Junior College in 1974. He continued his studies at Troy State University, where he received a Batchelor of Science degree in 1976. Finally, he attended Southern Methodist College in Augusta, GA, in 1982. Pastor McCain was saved on March 13, 1958. On November 20, 1973, he and Inez committed to a life of full-time ministry. After serving nine years as pastor in the Southern Methodist Church, he served as an elder in the Independent Methodist Church at Northside Methodist Church and Academy, Dothan, AL, where he served as pastor and administrator for seventeen years. In 2004, he joined the Alabama- West Florida Conference of The United Methodist Church and served several churches in the Wiregrass area until his retirement in 2017 from Skipperville United Methodist Church after ten years of faithful service there. In his retirement, he continued to serve local United Methodist Churches in the Wiregrass area until August 2020. Pastor McCain served on numerous boards and committees, often in leadership positions, throughout his ministry. He was President of the Alabama Association of Independent Methodist Churches and a member of the Dothan District UMC Core Team for several years. Some of the churches he served were also recipients of Church Growth Awards and Church of the Year Awards during his tenure as pastor. He received the Denman Evangelism Award from the Alabama-West Florida Conference of The United Methodist Church in 2012 for his outstanding service in evangelism. Despite all of his accolades, Pastor McCain's proudest accomplishments in ministry were not the awards he received, but the difference he made in the lives of so many people throughout his 46 years of pastoral ministry. Pastor McCain loved serving his churches and their communities. His ministry to all of his church members indicated his love for them and the church. He had a special place in his heart for ministry to children, youth, and elderly. In his spare time, you could find Pastor McCain enjoying a meal with his family and friends, playing a round of golf, or rooting for the Alabama football team. Pastor McCain will be missed by his friends and family who appreciated him as a loving family man and beloved friend. Freddie was preceded in death by his beloved wife of 55 years, Inez Welcher McCain, on September 14, 2019; his parents Fred and Clara Mae McCain; his in-laws, Luther and Ina Belle Welcher; and his brother-in-law, Clyde Welcher. Survivors include his daughter, Michelle Baker (Larry), of Skipperville; his son, Scott McCain (Wesley), of Troy; his son, Christopher McCain (Jessica), of Prattville; four grandchildren, Trenton McCain, Kayla Fulgham (Coulter), Michael Noble, and Ava McCain; one great-granddaughter, Eve Mae McCain; a sister-in-law, Patsy Welcher, of Alexander City; and a niece and nephew, Diane Welcher and Leon (Tina) Welcher, both of Alexander City. In lieu of flowers, the family asks that all memorials be made to The United Methodist Children's Home, 3140 Zelda Court Suite 100, Montgomery, Alabama 36106-2607.