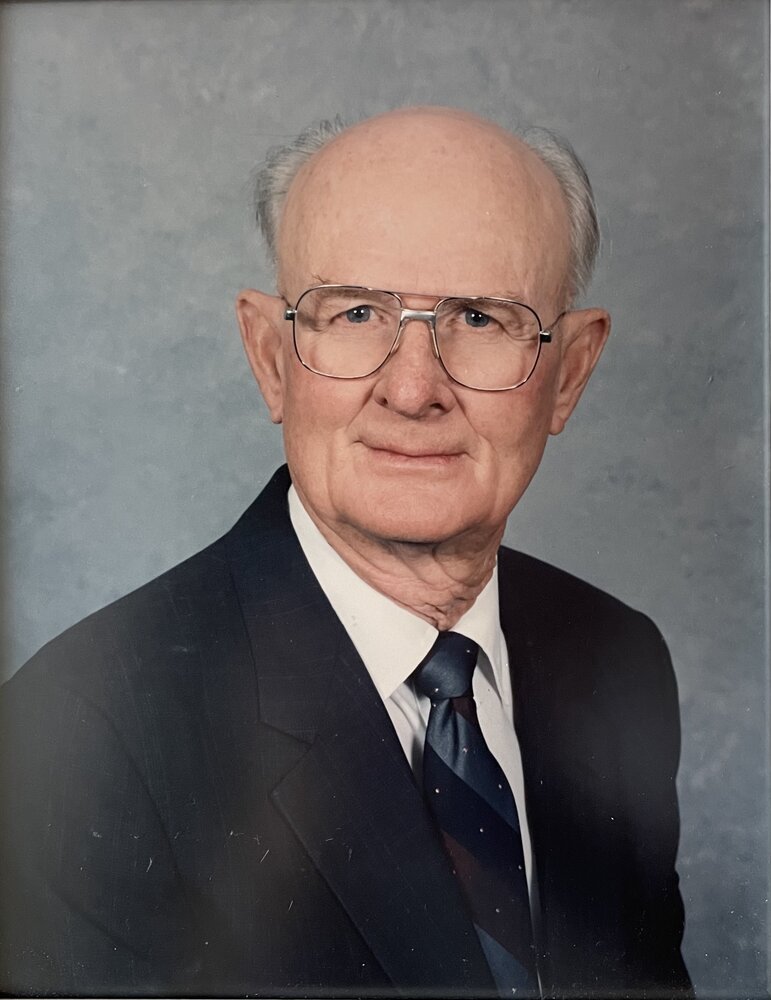 Obituary of Reverend William B. Easterling

Please share a memory of Reverend William B. to include in a keepsake book for family and friends.
View Tribute Book
Reverend William Bernard Easterling (Bill) of Clio, Alabama departed this life and began his journey unto God’s Eternal Kingdom on Monday, October 11, 2021 at 4:46 p.m. in Dothan, Alabama. A funeral service will be held at his home church, Ozark Baptist Church in Ozark, Alabama at 10:00 a.m. on Saturday, October 16, 2021, with Reverend Dr. Eric Fuller officiating. Burial will follow at Sykes Creek Baptist Church Cemetery, east of Clio, with Holman Funeral Home of Ozark directing. The family will receive friends at Holman Funeral Home from 5:00 p.m. - 7:00 p.m. Friday, October 15, 2021. Bill was born in Clio, Alabama on October 30, 1924, and has lived in Texas, Florida, Louisiana, Virginia, and Georgia. His mother Eula Mooneyham Easterling was a teacher and died when Bill was five years old. His father Willie B. Easterling was a farmer and pharmacist. Bill attended Clio schools before serving in the Army as a paratrooper, and joined the Merchant Marines in World War II. Bill returned to Alabama and studied pre-law at Troy State Teacher’s College, before going on to receive a Bachelor of Laws degree from The University of Alabama in June 1953, a Bachelor of Divinity degree from Southwestern Baptist Theological Seminary in Fort Worth, Texas in May 1957, and a Juris Doctor degree from The University of Alabama in June 1969. While in Fort Worth, Texas for his seminary studies, he met and fell in love with Elaine Battles. They married on July 12, 1958 at Turnertown Baptist Church in East Texas. Bill worked a short period of time as a teacher, and then for Texaco aboard the Virginia, Georgia, and Colorado ships in the engine room before becoming a devoted pastor, preaching to numerous congregations across southeast Alabama and Georgia throughout the years. As a successful entrepreneur for forty years, he started Easterling Fish Hatchery, which grew to be one of the largest producers of catfish fingerlings in the Southeast. In 2016, Bill moved to Whitehall Assisted Living in Dothan, Alabama. There he enjoyed investing in many new friendships, listening to gospel hymns, corresponding with friends and family across the globe, and continuing his long-time habit of reading two chapters of the Bible each morning. He would read one chapter from the Old Testament and one from the New Testament, “It’s like having fellowship with God at the beginning of the day,” he said. He was preceded in death by his bride of 51 years, Elaine Battles Easterling, his mother Eula Mooneyham Easterling, his father Willie B. Easterling, his sister Elsie Frances Easterling Faulhaber, and his brother-in-law Burnie Frank Battles. He is survived by his brother-in-law Fred Battles of Duncanville, TX, sister-in-law Mary Helen Battles of San Antonio, TX, his nephews Don Faulhaber of San Diego, CA (Norika), Alan Faulhaber of Albuquerque, NM (Nanette), David Faulhaber of Oceanside, CA (Irma), Aaron Battles of Midland, TX (Jessica), Jay Battles of San Antonio, TX (Eliza), his nieces Chrissy Battles Hopper of Hamilton, TX (Heath), Kristi Battles Reavis of Dallas, TX (Ben), and Brittany Battles Smith of Fort Worth, TX (Zack) and many close and faithful friends.Over the years Bill and his wife cared for over 60 dogs that were dropped off near their country home. Each animal was taken to a veterinarian and lovingly cared for until its death. If you would like to remember Bill, may we suggest that you make a donation to a Humane Society or to the charity of your choice. And if someone drops off a dog or cat near your home, take it in and maybe name it Elaine for a girl or Bill for a boy. One of Bill’s favorite scripture passages was John 14:1-3: “Let not your heart be troubled: ye believe in God, believe also in me. In my Father's house are many mansions: if it were not so, I would have told you. I go to prepare a place for you. And if I go and prepare a place for you, I will come again, and receive you unto myself; that where I am, there ye may be also.”
To send flowers to the family or plant a tree in memory of Reverend William B. Easterling, please visit Tribute Store
Thursday
14
October

Share Your Memory of
Reverend William B.
Upload Your Memory View All Memories
Be the first to upload a memory!
Share A Memory
Send Flowers