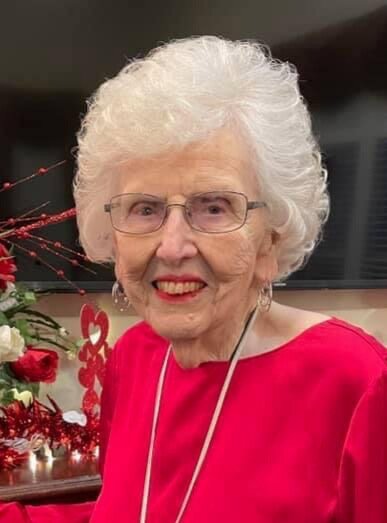 Please share a memory of Myra Ezell to include in a keepsake book for family and friends.
View Tribute Book
Mrs. Myra Sybil Ezell Smith, a resident of Dothan and formerly of Andalusia, died Saturday morning, January 22, 2022 at the age of 92. Funeral services for Mrs. Smith will be graveside 2:00 P.M. Monday, January 24, 2022, in Westview Memorial Cemetery with Mr. Steve Barlow and Mr. Ziba Anderson officiating. Interment will follow, Holman Funeral Home and Cremations of Ozark directing. Mrs. Myra Sybil Ezell Smith was born October 7, 1929 at home in the Long Street Community of Dale County. Her parents were Irma Blackmon Ezell and Charlie C. Ezell. She attended Ozark City Schools, graduating early from what was then Dale County High School. Attending business college in Dothan, she purchased bus tickets from her future husband, Charles Franklin Smith, who followed suit and began attending the business college too. They married in June 1954 at Ozark Baptist Church. An efficient stenographer for decades with private and state agencies, she treated others with respect and kindness. She and Charlie lived in North Augusta, South Carolina and Augusta, Georgia (where their two daughters were born), Columbus, Georgia and her adopted hometown of almost 50 years, Andalusia, Alabama. There she enjoyed many friendships and her church home, First Baptist Church of Andalusia. Leaving Andalusia, she made her home at Whitehall Assisted Living in Dothan for the past five years. Known for her quick wit, compassion for others, notes of encouragement, prayer ministry and convivial personality, she adapted to life changes with grace. She was preceded in death by her parents and her husband. She is survived by her brother, Mancil Ezell of Nashville, Tennessee; two daughters and sons-in-law, Lisa Thompson (David) of Dothan and Lori Roberts (Don) of Birmingham; five grandchildren, Natalie Owens (Keith), Dr. Benjamin Roberts (Katie), Lorilyn Nable (Tyler), Reverend Eric Roberts (Morgan), and Samuel Roberts. She delighted in time spent with her first great-granddaughter, Harper Claire Owens and recently celebrated the birth of her great grandson, Eli Fuller Roberts. The family would like to thank friends and the staff and residents at Whitehall Assisted Living. In lieu of flowers, memorials may be made to the First Baptist Church, 700 East Three Notch Street, Andalusia, Alabama 36420; Grace Klein Community, 1678 Montgomery Hwy #104, Birmingham, Alabama 35216; or to Pilots for Christ, 107 Airport Road, Monroeville, Alabama 36460.
To send flowers to the family or plant a tree in memory of Myra Ezell Smith, please visit Tribute Store
Monday
24
January

Share Your Memory of
Myra Ezell
Upload Your Memory View All Memories
Be the first to upload a memory!
Share A Memory
Send Flowers