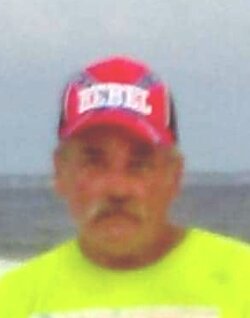 Please share a memory of Joseph to include in a keepsake book for family and friends.
View Tribute Book
Mr. Joseph Anthony East, a resident of Eufaula, died April 22, 2022, at his home. He was 61 years old. A memorial visitation for Mr. East will be held Monday, May 2, 2022, in the Chapel of Holman Funeral Home and Cremations in Ozark from 4:00 P.M. until 5:00 P.M. Mr. East was born December 15, 1960 in Houston, Texas to the late Harry Kenneth East and Roberta Nims East. He worked with West Point Stephens Inc. for twenty years and most recently with Tyson Foods. Joe loved wood-working and was very creative with driftwood making swings and chairs. He also enjoyed collecting coins. In addition to his parents, he was preceded in death by three brothers, Randy East, Clifford East and Douglas East. Survivors include one son and daughter-in-law, Thomas “T.J.” and Geri East of Screamer, Alabama; three brothers, Richard East (Judy) of Maine, Ruben East of Echo, Gordon East (Terrie Lee) of Abbeville.
To send flowers to the family or plant a tree in memory of Joseph East, please visit Tribute Store
Monday
2
May

Share Your Memory of
Joseph
Upload Your Memory View All Memories
Be the first to upload a memory!
Share A Memory
Send Flowers