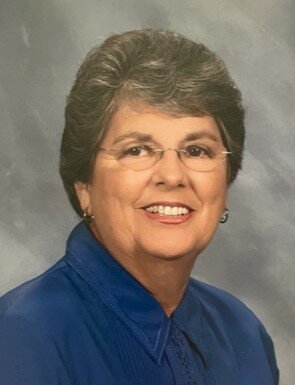 Please share a memory of Emily Lois Powers to include in a keepsake book for family and friends.
View Tribute Book
Mrs. Emily Lois Powers Maheu, a resident of Ozark, died Monday, November 28, 2022, after a long battle with Alzheimer’s Disease. She was 81 years old. A memorial service for Mrs. Maheu will be held 11:00 A.M. Friday, December 2, 2022, from Chalkhead Baptist Church with Reverend Michael Woodham officiating, Holman Funeral Home of Ozark directing. The family will receive friends in the church Friday from 10:00 A.M. until service time. Emily was born June 5, 1941 in Ozark, Alabama to the late Glenn Foster Powers and Mannie Lois Andrews Powers. She was a graduate of Carroll High School in 1959, George C. Wallace State Vocational Technical School in 1960, with undergraduate studies in accounting and computer sciences at the University of California in San Diego, Belleville Area College and Mira Costa Community College. Emily worked as an Administrative Professional until her retirement. She and her late husband lived in various places while he served in the United States Air Force, most recently in Niceville, Florida. Emily counted as her greatest achievement raising two sons to be good productive citizens. She and her husband were very active in various community activities and in the First United Methodist Church in Niceville. During her husband’s military career, she was involved in multiple volunteer activities earning her the honor of being named Outstanding Young Woman of America 1975. In recognition of her work, she received numerous accolades from various civic, governmental, and religious organizations. In addition to her parents, she was preceded in death by her husband, Robert Fredrick Maheu; and one brother, John Foster Powers. She is survived by two sons, SSgt David William Maheu of Henderson, Nevada, Michael Travis Maheu (Kelly) of San Diego, California; grandchildren, Samantha Maheu and Haley Thomas (Malcolm); one great granddaughter on the way, Jayla Mae Thomas; one brother, Stanford Powers (Sherrie) of Ozark; three sisters, Eldessa Phillips (Ralph) of Skipperville, Sharon Enfinger and Cathy Williams (Fred) all of Midland City, Alabama. Several nieces and nephews also survive. In lieu of flowers, memorials may be made in her memory to the Alzheimer’s Association at www.alz.org.
To send flowers to the family or plant a tree in memory of Emily Lois Powers Maheu, please visit Tribute Store
Friday
2
December

Share Your Memory of
Emily Lois Powers
Upload Your Memory View All Memories
Be the first to upload a memory!
Share A Memory
Send Flowers